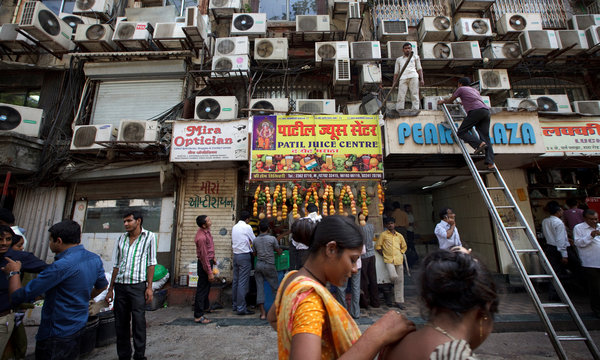 In the ramshackle apartment blocks and sooty concrete homes that line the dusty roads of urban India, there is a new status symbol on proud display. An air-conditioner has become a sign of middle-class status in developing nations, a must-have dowry item.

It is cheaper than a car, and arguably more life-changing in steamy regions, where cooling can make it easier for a child to study or a worker to sleep.

But as air-conditioners sprout from windows and storefronts across the world, scientists are becoming increasingly alarmed about the impact of the gases on which they run. All are potent agents of global warming.

Air-conditioning sales are growing 20 percent a year in China and India, as middle classes grow, units become more affordable and temperatures rise with climate change. The potential cooling demands of upwardly mobile Mumbai, India, alone have been estimated to be a quarter of those of the United States.

Air-conditioning gases are regulated primarily though a 1987 treaty called the Montreal Protocol, created to protect the ozone layer. It has reduced damage to that vital shield, which blocks cancer-causing ultraviolet rays, by mandating the use of progressively more benign gases. The oldest CFC coolants, which are highly damaging to the ozone layer, have been largely eliminated from use; and the newest ones, used widely in industrialized nations, have little or no effect on it.

But these gases have an impact the ozone treaty largely ignores. Pound for pound, they contribute to global warming thousands of times more than does carbon dioxide, the standard greenhouse gas.

The leading scientists in the field have just calculated that if all the equipment entering the world market uses the newest gases currently employed in air-conditioners, up to 27 percent of all global warming will be attributable to those gases by 2050.

So the therapy to cure one global environmental disaster is now seeding another. “There is precious little time to do something, to act,” said Stephen O. Andersen, the co-chairman of the treaty’s technical and economic advisory panel.

The numbers are all moving in the wrong direction.

Atmospheric concentrations of the gases that replaced CFCs, known as HCFCs, which are mildly damaging to the ozone, are still rising rapidly at a time when many scientists anticipated they should have been falling as the treaty is phasing them out. The levels of these gases, the mainstay of booming air-conditioning sectors in the developing world, have more than doubled in the past two decades to record highs, according to the National Oceanic and Atmospheric Administration.

And concentrations of the newer, ozone-friendly gases are also rising meteorically, because industrialized countries began switching to them a decade ago. New room air-conditioners in the United States now use an HFC coolant called 410a, labeled “environmentally friendly” because it spares the ozone. But its warming effect is 2,100 times that of carbon dioxide. And the treaty cannot control the rise of these coolants because it regulates only ozone-depleting gases.

Read the rest of this article at NYTimes.com.

What is a SEER rating?

What Type of A/C Unit Do I Have?